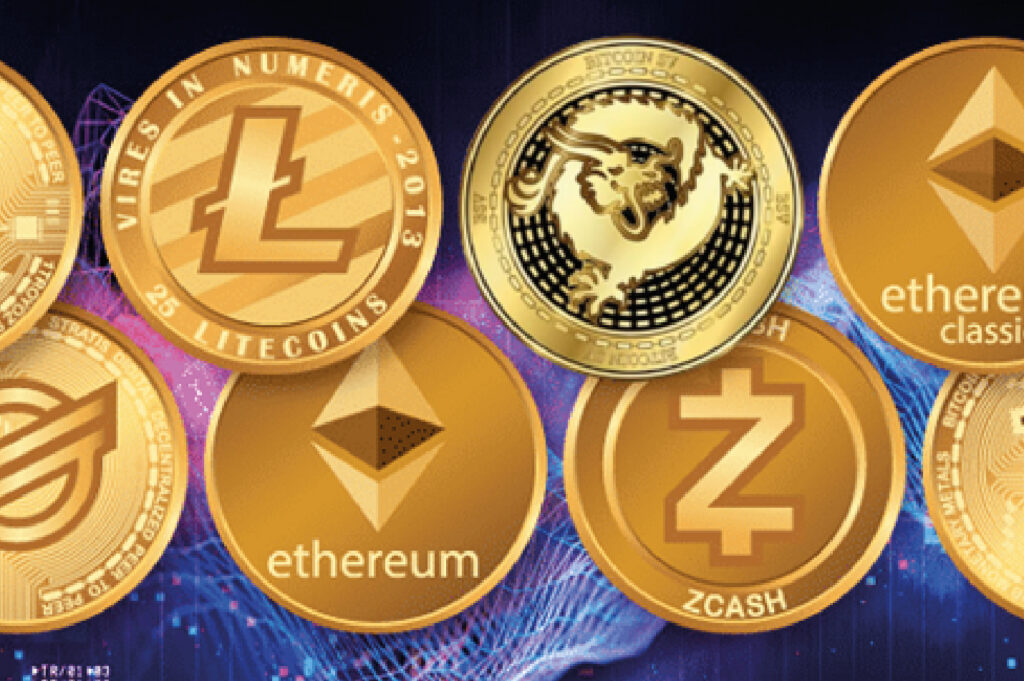 Cryptocurrency, often known as crypto-currency or crypto, is any type of digital or virtual currency that uses encryption to safeguard transactions. Cryptocurrencies operate without a central issuing or regulating authority, instead relying on a decentralized system to track transactions and create new units. Cryptocurrency is a digital payment mechanism that does not rely on banks for transaction verification. It’s a peer-to-peer system that allows anyone to make and receive payments from anywhere. Cryptocurrency payments exist solely as digital entries to an online database identifying specific transactions, rather than as tangible money carried around and exchanged in the real world. The transactions that you make with cryptocurrency funds are recorded in a public ledger. Digital wallets are used to store cryptocurrency.

The moniker “cryptocurrency” comes from the fact that it uses encryption to verify transactions. This means that storing and sending cryptocurrency data between wallets and to public ledgers requires complex coding. Encryption’s goal is to ensure security and safety. Bitcoin, the first cryptocurrency, was created in 2009 and is still the most well-known today. Much of the fascination with cryptocurrencies stems from the desire to trade for profit, with speculators driving prices high at times.

Cryptocurrencies are based on the Blockchain–a distributed public ledger/database that keeps track of all transactions and is updated by currency holders. Cryptocurrency units are formed through a process known as mining, which entails employing computer processing power to solve complex mathematical problems in order to earn coins. Users can also purchase the currencies from brokers, which they can then store and spend using encrypted wallets. You don’t possess anything concrete if you own cryptocurrency. What you possess is a key that enables you to transfer a record or a unit of measurement from one person to another without the involvement of a trustworthy third party. Although Bitcoin has been present since 2009, cryptocurrencies and blockchain technologies are still in their infancy in terms of financial applications, with more to come in the future. Bonds, stocks, and other financial assets might all be traded via the technology in the future.

In the present time everybody must have heard of the terms Blockchain, Bitcoin, Cryptocurrency, and other similar technologies, and how they’ve had a huge impact on the digital world. These technologies are extremely well integrated and so work in concert. Let’s look at the fundamentals of cryptocurrency to gain a better knowledge of it. First, let’s define what a cryptocurrency isn’t. A cryptocurrency is not a form of money that can be utilized in everyday life. It can only be used to conduct transactions in the digital realm. To buy or sell with a cryptocurrency, it must first be translated from a digital form to a real-world currency. Dollars, rupees, and so forth. Let’s have a look at the image below to see what it’s all about.

Inflation protection: Inflation has caused the value of several currencies to depreciate over time. Almost every cryptocurrency is introduced with a predetermined amount at the moment of its inception. The amount of any coin is specified in the source code; for example, there are only 21 million Bitcoins available in the globe. If a result, as demand rises, its value rises as well, keeping pace with the market and, in the long term, preventing inflation.

Any currency’s governance and upkeep are critical to its growth. Developers/miners are rewarded for storing cryptocurrency transactions on their hardware by receiving the transaction fee. Because the miners are compensated for their work, they keep transaction records accurate and up-to-date, ensuring the cryptocurrency’s integrity and decentralizing the records.

Protected and private: Cryptocurrencies’ privacy and security have always been a key worry. The Blockchain ledger is made up of a series of difficult-to-solve mathematical riddles. As a result, bitcoin transactions are more secure than regular electronic transactions. Cryptocurrencies employ pseudonyms that are unrelated to any user, account, or recorded data that may be linked to a profile for improved security and privacy.

Decentralized: One of the main advantages of cryptocurrencies is that it is largely decentralized. Many cryptocurrencies are controlled by the developers who use them and those who own a considerable amount of the coin, or by a company that develops them before they are launched into the market. Unlike fiat currencies, which are controlled by the government, decentralization helps keep the currency monopoly free and in check so that no single organization can dictate the flow and value of the coin. This, in turn, keeps it stable and secure.

Mode of transaction that is cost-effective:

Sending money across borders is one of the most common uses of cryptocurrencies. The transaction fees paid by a user are decreased to a negligible or nil amount with the help of bitcoin. It does it by removing the requirement for third-party verification, such as VISA or PayPal. This eliminates the need for any further transaction costs.

A quick method of transferring payments:

Cryptocurrencies have always maintained their position as the best option for transactions. Cryptocurrency transactions, whether international or domestic, are lightning fast. This is due to the fact that the verification takes extremely little time to complete because there are so few barriers to overcome.

Can be used for illicit transactions: Due to the great secrecy and security of cryptocurrency transactions, it’s difficult for the authorities to track down or monitor any user by their wallet address. Bitcoin has already been used as a means of exchanging money in a variety of criminal transactions, including the purchase of drugs on the dark web. Some people utilize cryptocurrency to mask the origins of their illegally obtained money by converting it through a trustworthy intermediary.

Financial losses can result from data loss: The designers aimed to make source code that was essentially untraceable, powerful hacking defences, and impenetrable authentication mechanisms. Putting money in cryptocurrency, rather than actual cash or bank vaults, would be safer. However, if a user loses their wallet’s private key, there is no way to recover it. The wallet, as well as the number of coins within, will be kept secure. The user will suffer a financial loss as a result of this.

Decentralized yet still controlled by a third party: Cryptocurrencies are known for their decentralized nature. However, the founders and some organizations still control the flow and amount of various currencies on the market. These investors have the ability to manipulate the coin’s price in order to achieve big price swings. Even heavily traded coins, such as Bitcoin, which rose in value three times in 2017, are vulnerable to similar tricks.

Adverse Environmental impact of mining cryptocurrencies: Mining cryptocurrencies requires a lot of processing power and electricity, making it a very energy-intensive process. Bitcoin is the main perpetrator in this. Bitcoin mining necessitates powerful machines and a lot of energy. It’s impossible to do with a regular PC. Bitcoin miners are concentrated in nations where coal is used to generate electricity, such as China. China’s carbon footprint has risen dramatically as a result of this.

Susceptible to hacks: Exchanges are vulnerable to hacks, despite the fact that cryptocurrencies are quite safe. Most exchanges save user wallet info in order to correctly operate their user ID. Hackers could steal this information, giving them access to a large number of accounts. These hackers can quickly move funds from those accounts once they have gained access. Some exchanges, like as Bitfinex and Mt Gox, have been hacked in recent years, and Bitcoin worth hundreds to millions of dollars has been stolen. Although most exchanges are now quite secure, another hack is always a possibility.

No refund or cancellation policy: The currency cannot be retrieved by the sender if there is a dispute between the parties involved, or if someone sends funds to the wrong wallet address by mistake. Many people can utilize this to defraud others of their money. Because there are no refunds, one can simply be formed for a transaction for which they never received the product or services.