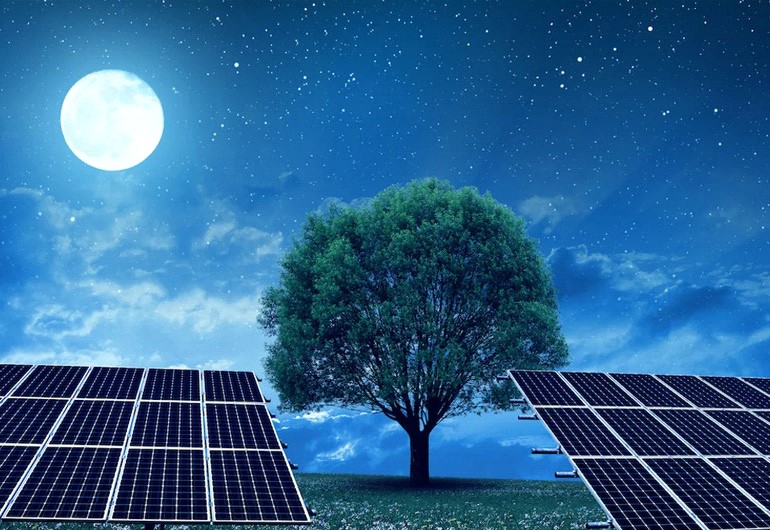 Solar panels effectively convert sunlight into energy using the sun as the primary source. But why can’t solar panels create power cheerfully at night? Yeah alright! Solar panel design and technology have been created to operate with the sun. Moonlight can be utilized to power PV cells, according to a few specialists. Given that moonlight is just sunlight reflected off the moon, you’ll be relieved to learn that yes, solar panels can operate with moonlight. Your solar panels will, however, create very little power at night, even if the moon is shining directly on them with no clouds in the sky. You should only anticipate 0.3 percent of the energy generation that you would get from direct sunlight on a clear night with a full moon. That implies that if your solar panels normally produce 300 watts during the day, they will only produce around one watt under full moonlight. That’s not even close to the amount of energy necessary to power an ultra-efficient LED light bulb – in fact, operating one lamp with an LED bulb would take nearly 18 times more electricity and that’s with the moon full! Your solar panels will generate even less electricity from moonlight for the remainder of each moon cycle.
What happens at night? Because heat is easier to store than electricity, solar panels with solar thermophotovoltaic (STPV) cells may create electricity at night if the heat they received during the day is retained. STPV increases the amount of solar energy available for conversion by adjusting the energy to fit the preferred wavelength of the PV cell. The PV cell is getting more solar energy at the appropriate wavelength, enabling it to generate more electricity while using the same amount of total solar energy. The researchers aren’t quite sure how the heat will be kept. I’m wondering whether the emitter material can have a significant thermal mass, allowing it to heat up slowly and hold its heat after the sunshine has faded away. Instead of a surge of energy when the sun shines and then nothing after sunset, you’d have a more consistent energy output day and night. Modified solar panels that function at night create enough electricity to charge a cell phone or power an LED light, eliminating the need for off-grid places to store energy in batteries. Solar power is created when the sun’s energy is directed towards a comparatively cool solar panel. Solar cells are layers of a semi-conducting substance, commonly silicon, that make up the panel. A flow of electricity is generated when light shines on this substance. At night, however, since heat goes in the direction of lower temperatures, solar panels transmit heat to outer space, which has a temperature of roughly 3 kelvin (-270.15°C). As a result, the solar panel is colder than the night air, creating a temperature differential that may be used to generate power. A customized solar cell with a power output of 50 milliwatts/square meter was produced when directed towards a clear night sky during testing. This is just 0.04 percent of the power output of a standard solar cell when used during the day. Low-power gadgets, such as a phone charger or a low-wattage LED light, would be able to work with 50 milliwatts per square meter of radiation, though.
At night, the solar panel may really achieve a temperature below that of the surrounding air, which is an exceptional possibility for power collecting. “The good thing about this strategy is that at night, you basically have a direct power supply that doesn’t need any battery storage”.